Repairing a gearbox can save up to 80% on the cost of replacing the gearbox casing.

The skeg acts like a fin and helps to steady and control the water flow to the propeller. Once damaged it not only reduces the propellers efficiency and therefore the engines performance, but also leaves the gearbox unprotected against further damage. All our skeg repairs are of the highest quality. 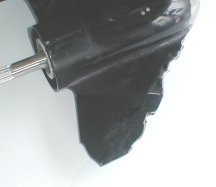 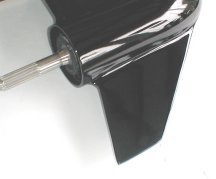 Cavitation plate is the name commonly used for the plate situated just above the propeller on an outboard or outdrive unit. The correct name is an Anti Ventilation Plate. The purpose of the plate is to keep a head of water over the propeller when the boat is on the plane. If this plate is damaged it will cause bad ventilation problems and reduce your performance dramatically. We can normally repair damage in this area no matter how sever. 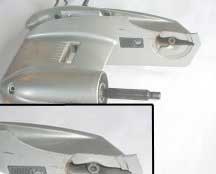 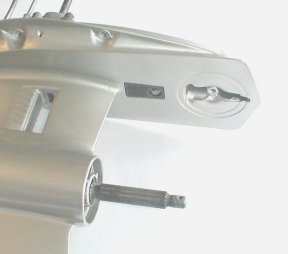 The same gearbox after repair with no evidence of repair and completely refinished in original colour.

Sample of a repair to the gearbox bullet. The damage was caused by corrosion. A piece had burst out from the side of the box and the retaining nut thread, what was left of it, was very badly corroded. The complete rear end of the gearbox was replaced including the thread and retaining nut.
We can repair very extensive damage of this type so long as the damage does not go as far as the bearing carrier o’ring seal.

Stage 1
Damaged gear box with bearing carrier and shaft removed. The gearbox was split due to corrosion and the retaining thread was corroded away. 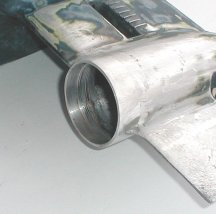 Stage 2
Gear box at the part repaired stage with the new section fitted. Both the missing part and the thread have been replaced.